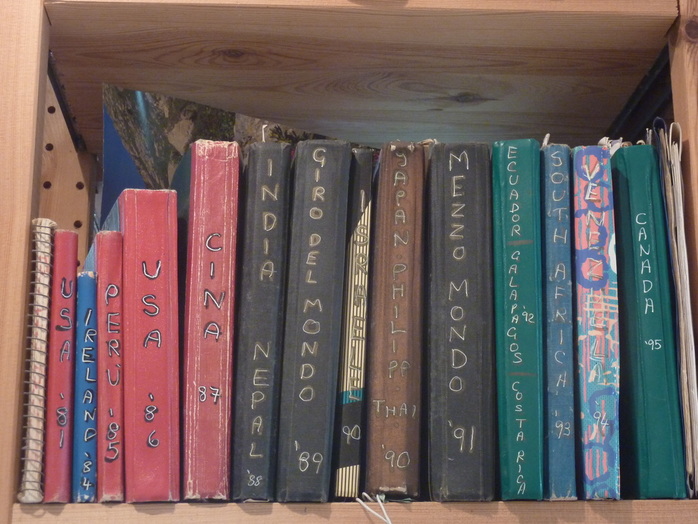 ﻿Tragicomic Episodes from a Globe-Trotter's Diary﻿

As a young, well-travelled globe-trotter, I prefer visiting countries in order to get to know the people, their customs and traditions, rather than only seeing the sights from an air-conditioned bus after having left an anonymous first-class hotel.  On my travels I have come across many tragicomic episodes worth recounting, which are not only amusing in themselves but offer a great insight into the ways and being of different peoples in far off countries.

The best way to appreciate other mentalities and ways of life is to try and integrate oneself with the people by travelling with local forms of transport, eating in local restaurants and sleeping in hotels where one can mix with the locals rather than with tourists.
Ways of the World (written in 1988):
Srinigar, the capital of Kashmir in the very north of India, is famous for its houseboats, where tourists stay in fully furnished rooms often with private bathrooms, enjoying exquisite meals in chandaliered dining rooms before lounging in luxuriously carpeted living rooms.  We were staying in a more modest two bedroom houseboat with private bathroom, which nevertheless had a beautifully carved table amongst its luxuries in the living room.

One evening I was relaxing on my bed when I heard a strange metallic rattling and immediately attributed it to the noise the ropes make when they hit the mast in the wind.  Only shortly afterwards did it occur to me that our houseboat had no mast.  Then I listened and felt it must be in the room.  I took my torch and looked under the armchair:  there, in a cage, was a huge rat scratching at the door to get out.  I called the owner immediately, who reacted by saying, "Thank goodness you found it.  It's been running around the boat for days and so I thought I'd put a trap in your room just in case."  It was very unpleasant to know a rat had been roaming our room and that others could be around, but to find out that the owner had let it free on the other side of the lake because he "hadn't the heart to kill it," certainly surprised us.

The Japanese are notoriously clean, leaving their street shoes at the front door.  For the uninitiated foreigner this means a lot of practice is needed in slipper changing.  Japanese Ryokan are small, but homely hotels in true Japanese style.  At the entrance one encounters rows of street shoes neatly lined up under the first step which leads inside.  On the step are numerous slippers ready to be donned by anyone who wishes to enter.  Once inside these slippers are only to be worn in the halls, never in the rooms, which have 'tatami' mat floors on which one walks in socks or barefoot.   Just inside the bathroom, whether private or shared, are other slippers.  This means that if I leave my room to use the toilet, I must put on my hall slippers and take them off outside the toilet, because the toilet slippers are just inside.  And wo betide the tourist who is caught walking around the hall with the toilet slippers he forgot to slip off again!!

Precision is another asset of the Japanese and having lived in Germany, I am quite used to it.  However, lining up to catch arriving trains in Japan certainly amazed me.  If you buy a ticket with a reservation, you need only to look at the numbered signs along the platform.  Besides pointing out where your carriage will stop, the markings on the ground tell you exactly where to stand so you will enter the door which is nearest to your seat number.  In fact the train halts exactly with its doors parallel to these markings.  This is amazing considering the fact that the Shikansen Bullet Train travels at speeds of up to 250km per hour!

In a country like Japan, where a large population is concentrated in a small area, getting away from it all can be most difficult.  One Sunday we had the brilliant idea of going to Hakone, a famous national park just outside Tokyo, in order to spend a nice relaxing day next to the mountain lake, hoping to catch a glimpse of Mount Fuji peeking from behind the clouds and carrying a bathing costume to wear in one of the thermal pools of the area.  At 8.00 a.m. on a Sunday morning Tokyo station was unusually busy with extra stalls set up to sell "bento"s  (packed lunches) and families loaded with small rucksacks hurrying to the trains.  Once off the Shinkansen train at Odawara station, we lined up to get our onward tickets.  A fifteen minute train ride brought us to Yumoto but by the time we got off, our next train was jam packed and we crammed in to stand like sardines for the half hour trip.  At Gora a twenty-minute queue allowed us to get tickets for the cog-wheel train in which we actually sat for the very few minutes it took to get to the top, Souzuno.  There we queued for another fifteen minutes in order to catch the longest cable car in Asia.  The view was impressive and at the first station we stopped off to see some geysers, which were definitely not worth the time we spent waiting to get back on.  At the second station we had intended getting off to bathe in the thermal pools but the staff told us we would never get back on, since no empty cars were coming through.  At the top, Togendai was where we found our mountain lake but there seemed to be nowhere to relax.  We were not able to enjoy the peacefulness we had been looking forward to because the area was just not peaceful.  So we lined up to cross the lake on the red and gold painted boat, camouflaged as an old sailing ship and once finally on it, we tried to relax for the forty minutes we stood on the crowded boat.   The lake of volcanic origin was extremely beautiful but at that point we were so stressed that we were unable to enjoy it.  Not finding anywhere to sit down and relax because the buses were belching black fumes on the lake front, not having even caught a tiny glimpse of Mount Fuji, we decided to take the bus back down and three-quarters of an hour later we were in Yumoto again.  On the short train ride to Odawara, we decided to let everyone else rush home to Tokyo whilst we stopped in this calm, uncrowded town of little interest to have a relaxing meal.

Whichever form of transport one chooses in China, it is always an adventure.  Trains for the foreigner seem to be the most exciting.  The communications system is extremely poor so that one can only make seat/couchette reservations at least six days in advance and only from the original station of departure.  If you happen to be travelling through the country and stopping off to visit towns for less than six days, as was my case, you can forget trying to make a reservation.  Reservations cannot be made when boarding at intermediate stations, since they have no way of knowing which seat/couchettes were booked from the original station of departure.  The only hope is to try once on the train.

One of our longest train journeys started in Xian, where one can see the famous terracotta army.  We managed to book two 'hard seats' (the other class is 'soft seats') and they turned out to be as hard as ever, with very straight backrests.  Actually, it was quite interesting to see that once seated, everyone took out a little towel and hung it on a hook above their seats.  I later discovered this served to wipe down the continuous streams of sweat that are inevitable in the summer heat despite the numerous fans (which for some reason work when there is the breeze caused by the train speeding along, but do not work when the trains stop at the stations, so that the heat is even more stifling).  The next ritual for each passenger was to put a tin cup with lid on the little table jutting out between the facing seats.  Into these they added a few tea leaves.  Moments after the train left an attendant passed by filling the cups with boiling water from a giant kettle, kept warm on a fire burning between carriages.

Thus began our scheduled five hour night journey to Luoyang, where we were to visit the Longmen Caves.  Not having found room in the couchettes, we spent the night sharing our two reserved 'hard seats' with another two Chinese who managed to squeeze in, one of whom fell asleep with his head nodding on my shoulder.  Eight sleepless hours later we got off at our destination.

Having spent the day visiting Luoyang's sights, we bought our onward journey tickets to Beijing.  No kind of reservation at all, of course, since this was an intermediate stop and reservations could only be made at Xian.  The train was due to leave at 7.30 p.m. but on showing our tickets, we were told that the train was twelve hours late!  Considering that Xian is officially five hours journey away, this seemed to be quite a record!  We decided to catch the next train which brought us to Zengzhou, on the junction with the Beijing line.  Whether this was unacceptable because the Chinese only catch direct trains, or because our tickets were only valid for the direct train was never clear to us.  However, amongst heavy protest from the station attendants we boarded the train.

At 11.30 p.m. we were at Zengzhou.  According to our interpretation of the all-Chinese timetable, the next train to Beijing left at midnight.  We lined up to have our tickets amended.  After much incomprehension, obviously because what we were doing was not usual, our tickets were updated and we were accompanied to the waiting room area reserved for those leaving on the 6.00 a.m. train.  We therefore settled down to our second sleepless night, hoping to steal a few hours nap by resting against each other.  Impossible!  A uniformed guard walked through the waiting room every half hour and violently shook awake anyone even vaguely dozing.  There may have been a "No Dozing!" sign on the wall, but to us illiterate in the Chinese language, it was certainly not apparent.

The journey to Beijing was no more eventful than any other that has been spent sitting on a train floor for ten consecutive hours in sweltering heat.  However, it was fascinating watching with what dexterity small children were able to manoeuvre their chopsticks whilst eating on a jolting train.  Unfortunately the hygienic advantages of modern packaging meant that all polystyrene lunch boxes were automatically thrown from the window of the moving train, littering the still medieval looking Chinese countryside.

Subsequent shorter train journeys acquainted us with interesting games that the Chinese love to play.  But however clean we all were when we boarded, on arrival our clothes were all a grubby grey, not to mention the dirt under our finger nails.  It was only after quite a few trips that we realised this filth was due to the fact that the trains are all run on coal, leaving a sooty trail.  For someone born in the electric/diesel train era, this was quite a revelation.